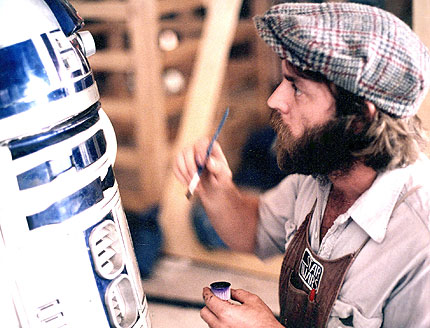 I think every kid has the idea at one point or another to start dabbling in model kits. I know I certainly did. I’m not sure why, but at around the age of 12, the idea of using rubber cement to assemble approximately 400 miniscule parts to assemble a perfect scale model of a Porsche held a certain strange appeal.

I quickly gave up the notion: Although the glue fumes were certainly a plus, I had managed to slice off the tips of each of my fingers with an Exacto knife by the end of my brief stab at model building, and I have never much fancied hobbies where a pre-requisite is a refrigerator full of Type A positive.

But maybe I gave up too soon. Over at Popular Mechanics, Grant McCune — only the guy behind all the neato starship models in Star Wars and Star Trek: The Motion Picture
has some authoritative advice on the art of sci-fi model making. It’s
pretty great stuff, but I’ll sum up the best point for you:
Over-emphasize the grime and detail of anything you’re modeling.
Especially X-Wings.