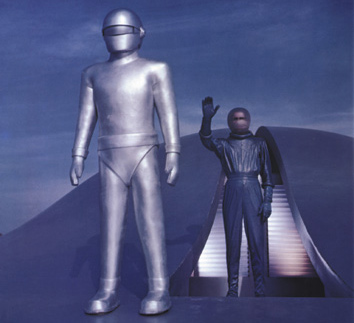 Keanu Reeves as Klaatu. What else do you need to know about the new Day The Earth Stood Still Remake to convince you it’s going to be stupid?

Granted, that algorithm doesn’t always end up with 100% predictions of quality: The Matrix is excellent despite Keanu. Actually, come to think of it, for a guy who can’t act, who subscribes to the Sock Puppet Method of Thespianism, Keanu’s pretty excellent about picking his roles: This is the guy who was in Bill & Ted’s Excellent Adventure, Dangerous Liaisons and Speed, after all.

So maybe discrediting a movie with Keanu Reeves in it doesn’t work. A better reason to discredit a Day The Earth Stood Still remake would be because the original is one of those boring “classics” that no one actually enjoys watching.

Plus, the original Cold War message to live in peace and harmony —
while just as a propos as it ever was — simply doesn’t have the same
weight without nuclear hysteria.

Don’t worry, then. The Day The Earth Stood Still remake’s
got you covered. They’re jettisoning the whole “Klaatu Warns the Earth
Against Taking Its Wars Into Space” plot. Now? Klaatu’s just against
global warming.

You know what? Go to hell, Klaatu. First of all, you don’t even live here. Second of all… what, now
Mother Nature needs a favor? Maybe she should have thought of that when
she was besetting us with droughts and floods and poison monkeys!
Nature started the fight for survival, and now she wants to quit
because she’s losing. Well, I say, hard cheese.

The Day The Earth Stood Still Remake Is About Global Warming