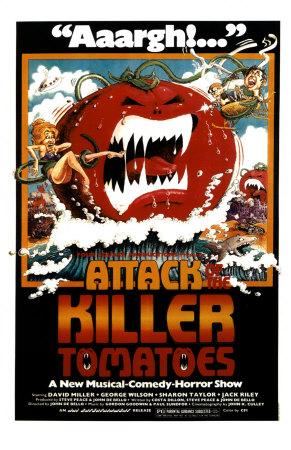 One of my pet peeves is people who don’t understand that Attack of the Killer Tomatoes was supposed to be a parody. I’m not arguing that a film’s status as such absolves it from critique, but what I will say is that if you think someone could possibly make a film about talking tomatoes in all seriousness — and if that person is not L. Ron Hubbard — you are out of your mind. So to all of you people who get their kicks slamming this Sci-Fi classic, lay off.

There. My rant is over now. But it’s important to understand that I truly appreciate and respect the original Attack of the Killer Tomatoes when I say that it is not exactly dying for a remake. But that’s just what’s going down at the hands of the gurus behind the popular (and execrable) Ask A Ninja series of YouTube videos. They claim to want to live up to the fine standard of the first film — a hard sell given their previous work. But if they can coerce George Clooney into wearing an afro, I’ll give them the benefit of the doubt.