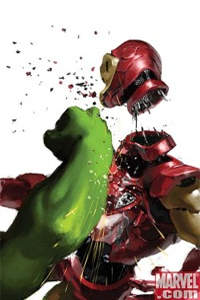 We’ve been privileged to have a pretty good run of comic book movies lately, and this summer’s Incredible Hulk and Iron Man movies look set to continue the tradition. But with Marvel having set up a new production company, will these films cross-over with each other? Scuttlebutt says yes: Rumor has it that Samuel L. Jackson, at least, will appear as Nick Fury in the new Iron Man movie.

But according to Iron Man star Robert Downey Jr, Tony Stark will also be making an appearance in The Hulk:

It happens to be a scene where I basically approach [William Hurt’s character, General Ross], and we may be considering going into some sort of limited partnership together…  I don’t want to give too much away — but he’s in disrepair at the time I find him. It was really fun seeing him play this really powerful character who’s half in the bag.

Call me a geek, but it sounds like this takes place at the end, General Ross has been beaten up by the Hulk, and Stark approaches him about the possibility of Hulkbuster Armor.