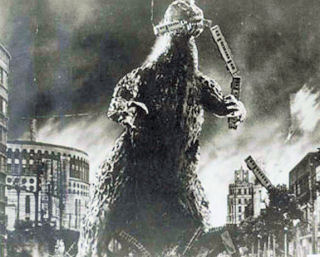 Speaking of giant monsters rampaging through major American metropolii, my old buddies over at WIRED’s Danger Room have not not one, but two fantastic posts up, detailing the actual military logistics of stopping a 500 foot tall monster from chomping on skyscrapers.

Wondering how well the government will be able to protect you? Sorry, guys… it looks pretty bleak. It turns out the reason the Army wasn’t able to stop the Cloverfield monster wasn’t mere incompetence, but also because they did not have any weapons that would plausibly work against a 100,000 ton monster. Keep in mind that most military weapons are designed to kill or destroy either humans, vehicles, or buildings…and they don’t even do that very well. A monster taller than the World Trade Center is a problem many magnitudes more troubling.

So what can we do if Godzilla attacks? One option, of course, is to nuke the thing — that will work, though it’s a pretty desperate measure. Another recourse would be to let the Navy try to handle it, especially if it’s a sea monster. Their weapons, after all, are designed to destroy steel-clad warships. So it’s possible the Navy could take the beastie out before it ever gets to land.