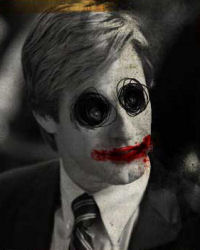 Here’s a tip for the Dark Knight marketing department: Dummy websites will not generate nearly as much buzz as movie trailers.

I suspect this free advice is falling of deaf ears, if the Dark Knight‘s dozen or so viral websites are any indication. Viral marketing is meant to increase brand awareness. In the Dark Knight‘s case, this makes little sense: Do they really need to increase brand awareness on Batman? It’s Batman! He sells himself!  Plus, I’m thinking anybody who has a 10-spot to dump on a 100 minutes of entertainment surely knows who Batman is by now.

So why does the Dark Knight need to resort to viral marketing?  Are multitudes of mindless movie-going drones flocking to the Dark Knight viral websites like rats to the Pied Piper’s flute?

The recipe behind these viral sites is plain enough:

What I don’t get is the lure that these websites are supposed to have
for moviegoers and why they seem to work. Apparently we are supposed
to be combing over these sites looking for even the smallest clues
about the upcoming film. (Oh look!  “Harvey Dent Put Dirty Cops Behind
Bars!” That tells me…exactly nothing!)  But why else would I want to
visit IBelieveInHarveyDent.com?  Even more curious are the offshoot “rival” sites TrustGarcetti.com and DanaWorthington.com, not to mention the related GothamElectionBoard.com.  What’s the point there?

Oh sure, I might want to get a little Gotham City flavor (as disgusting as that sounds) by checking out GothamPolice.com, GothamCityRail.com or WeAreTheAnswer.com
because, you know, nothing makes me want to spend money on movies more
than reading poorly-written, tell-nothing blurbs about fictional movie cities.

At least the Joker-related viral sites have fun with it.  First there was WhySoSerious.com. Now there’s the Joker’s parody of TheGothamTimes.com: It’s called TheHaHaHaTimes.com. Now that’s comedy. At least it is in the world of Dark Knight viral sites.