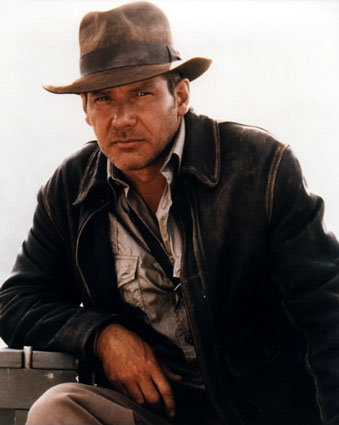 One of the things I find enraging about George Lucas’ demeanor isn’t so much that he took Star Wars in a direction I find totally stupid. That’s part of it, but what I really dislike is his perpetually stated dogma that the fans who hated the prequels are stupid, that there was no way he could make movies that would have impressed us, that its all our fault. Its a crappy way to treat the fans who have made you a billionaire, but it also betrays a mind that is only interested in  the opinions of sycophants.

So will Lucas change his tune for the upcoming Indiana Jones and the Kingdom of the Crystal Skull? Hardly. According to Lucas:

[W]e know that for the fans it won’t be the movie that they
have been making in their minds for the last 19 years, so they all get
bent out of shape. A lot of the critics forget that they didn’t like
the first three, and so they get off on this one, too — or it’s not
the Second Coming. And, yeah, we didn’t make it bigger and better, we
made it exactly the
same. So if you loved the other ones, you’ll love this one…

First of all, not changing the formula is good, so thanks for that,
George. We want a proper sequel. But what critics who “hated” the first
three are you talking about? Raiders of the Lost Ark has a 95% ‘Fresh’ Rating
on Rotten Tomatoes: The people who give it a thumbs down are crackpots.
Both sequels also rate 90+% success rates. Who are these haters you’re
pointing towards to pre-emptively dismiss all criticism? They don’t exist.