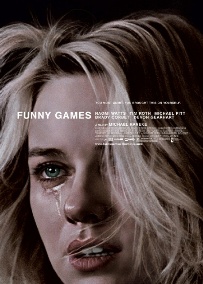 For the most part, critics have responded to Michael Haneke’s Funny Games with a curt “Thanks but no thanks.” If the film is a response to torture and violence in American film, is the cure worse than the disease?

“So here’s Haneke — Brian De Palma with no libido — getting a heap of Euros to reiterate what creeps we are to watch his movie. But what has the persnickety bastard made here, anyway, but grindhouse fare fogged with arthouse deodorant?” -Jim Ridley, Dallas Observer

“Funny Games feeds off of hatred like a monster, and as it storms American theaters, it stands to generate enough ill will to light up the Vegas strip.” -Scott Tobias, The AV Club

“Much as I may resent the facile polemics of Haneke’s shame-the-viewer project, I have to respect the way that he nailed me, trembling, to my seat.” -Dana Stevens, Slate

“What a clever, tricky game! What fun! What a fraud.” -A.O. Scott, The New York Times

“Haneke works in cleanly organized shots, with a nagging real-time pace
reminiscent of Kubrick. It’s a mode that prizes neatness and puts a
spotlight on whatever’s dirtying up the frame — like, say, a wash of
bloody brains in the corner.” -Owen Gleiberman, Entertainment Weekly

“Is this what American cinema comes down to – stupid torture movies
and intelligent, ironic torture movies? Thanks for slumming in our
country, Mr. Haneke. I hope they made it worth your while.” -Mick
LaSalle, SFGate

“There may be a way to shock the weekend lemmings into questioning why they go to Saw movies, but torturing them for one’s own high-minded jollies isn’t it.” -Ty Burr, The Boston Globe

“It’s one thing to make a movie filled with mayhem and then
implicate the audience for watching it; it’s another thing entirely to
come back ten years later with the same movie, hype it with a marketing
campaign, and try to implicate the viewer again. One nice thing about
America is that you can’t be tried twice for the same crime.” -J.R.
Jones, Chicago Reader