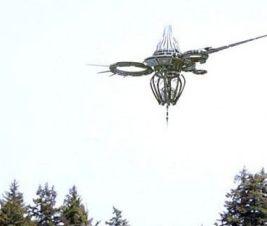 • Are these photos of a retro-cool spaceship part of a viral marketing campaign for the new X-Files movie or just a tease for Cloverfield II: Electric Alien Boogaloo?

• Larry Niven is among a group of sci-fi authors who are giving pro bono (and fairly ridiculous) advice to Homeland Security.

• If only the future actually looked like this Epcot Center concept painting from the 1970s for Spaceship Earth.

• Could an atom-smashing device
currently being built along the French-Swiss border actually rip a hole
in the space-time continuum and thus destroy the Earth? According to a
crusading botanist in Hawaii, yes it could.

• Superman Returns cowriter Michael Dougherty is helming Calling All Robots, an upcoming performance capture animated film with quite possibly the coolest title of all time.