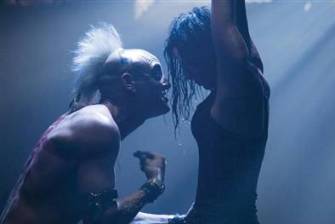 Critics apparently left their senses of humor at home when they went to screen Neil Marshall’s campy new apocalypse-fest, Doomsday. Fortunately a few regained them in time to write genuinely entertaining reviews of a movie that most consider a baffling follow-up to The Descent.

“While Doomsday is never as exciting as its source materials, it is fun in an agreeably dumb, unpretentious way. But if Marshall wants people to steal from him someday, he’s going to have to stop stealing so blatantly from others.” -Steven Hyden, The AV Club

“The zombies attacking Eden and her rapidly diminished crew in
Scotland don’t appear to be zombies at all. They’re just a race of
nihilist punk-rock freaks… Their leader, Sol (Craig Conway), is a
cross between Johnny Rotten and coked-up evil Gremlin. His lady-love is
like Amy Winehouse remade as a kind of aboriginal American Gladiator.”
-Wesley Morris, The Boston Globe

“I still believe with all my heart that no movie with real car
stunts, a tough-chick hero, and a severed head that thunks directly
into the camera can be all bad. But this is pushing it.” -Jim Ridley, LA Weekly

“Most fantasy-action films blow their budgets in the first half-hour, and limp home with their makeup smeared. Doomsday is unusually patient, smartly saving most of its fireworks for the later innings.” -David Hiltbrand, Philly.com

“The title of (Neil Marshall’s) gleefully derivative picture is Doomsday, but it could also be called The Road Warrior Escapes from Scotland 28 Days Later than The Omega Man.” -Ethan Alter, Film Journal International