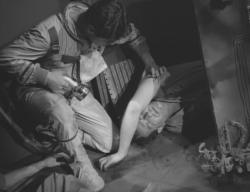 Richard Matheson has always been a favorite of mine. When I was 10, I convinced my father to spend an ungodly sum of money on a leather-bound, limited edition folio (signed by the man himself) of his complete short stories. I’ve seen his Twilight Zone episodes a thousand times. And while the recent Hollywood adaptation of I Am Legend, if released posthumously, would have hocked a loogie on Matheson’s hypothetical grave, I can’t help but stay excited when new movies based on his works come out.

So I have new reason to be excited. According to the Hollywood Reporter, first time director Michael Brandt has optioned the rights to the old Twilight Zone
episode, “Death Ship.” You know the one. Cosmonauts from the far-flung
future of 1997 land on a strange planet only to encounter a crashed
ship filled with their own doppelganger corpses. They must then piece
together where they are and whether or not they’re actually dead. The
movie version will be called Countdown… a much worse title, to be sure.

Brandt and his screenwriting partner Derek Haas already have a pretty good track record with 3:10 To Yuma and I don’t see how they can possibly muck this one up as badly as Legend. Time will tell!