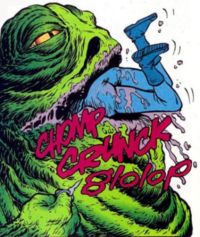 Over the weekend, Warner Brothers hosted ShoWest, a gala to show off their slate of 2008 releases. During the festivities, the Grand Beardo himself, George Lucas showed up, surrounded by a phalanx of stormtroopers (I wish I were kidding) to show off five minutes of the upcoming CGI Star Wars film, The Clone Wars.

According to witness reports:

The footage began with Anakin and his apprentice Ahsoka traveling to a major clone wars battle. They deploy with a bunch of clonetroopers and lead an attack straight up the side of a mountain to a base at the top. The vehicles they’re traveling in actually turn and start climbing vertically up the rock while the Jedi follow on ropes.

Following that there was a montage of footage with Duel of the Fates playing over it. There was one sequence where Count Dooku dispatches Asajj Ventress to find Jabba the Hutt’s son in an effort to win his favor.

You read that correctly: Jabba the Hutt’s son. I love it — the concept immediately evokes the mental image of two enormous alien gastropods slugging around like a pair of elephant seals. Make him a Jedi and have him flipping Yoda-like around a room with a lightsaber and I’ll just be in heaven.

Also, I just noticed: this is the first Star Wars film not to be released by 20th Century Fox. That’s going to make the familiar, iconic credits of the film seem very strange to me.