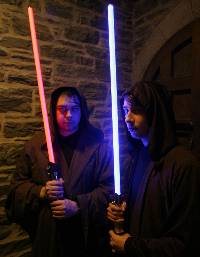 An order of Welsh Star Wars fans have spearheaded a plan…. to colonize the moon.

“We were able to buy property on the moon from an official moon real estate seller. We have bought one acre of the earths moon and have set up a government, constitution and royal family of our sovereign state.” say Daniel and Barnet Jones, heads of the UK Church of the Jedi, and apparently oblivious to the fact that there is no such thing as an “official moon real estate seller.” Also? You can’t buy a star and name it after your sweetie.

Still, the logistics of the United Nations’ various moon treaties aren’t going to stop these guys. They not only plan on setting up a capital city on the moon, but they will sell worthy Jedi titles of nobility, such as Lord and Lady.

Their base on the moon will also double as the location of the
Galactic Senate. The country will apparently be named The Galactic
State of Jediism, and the capital will be called Testa City.

A canny publicity stunt, young Jedi! I wonder how many gullible Star Wars fans you can convince to buy an imaginary lordship on the moon!