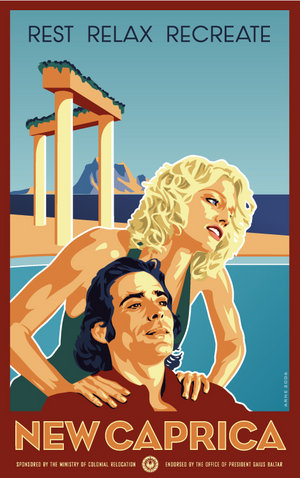 The development of the prospective Battlestar Galactica spin-off, Caprica, has been long and arduous. A prequel to BSG’s Caprican apocalypse, the show was to be set 50 years before the Cylon War, and follow “two families — the Greystones and the Adamas — as they grow, compete, and thrive in the vibrant world of the 12 Colonies. Enmeshed in the burgeoning technology of artificial intelligence and robotics that will eventually lead to the creation of the Cylons, the two houses go toe-to-toe. Caprica will deliver all of the passion, intrigue, political backbiting, family conflict and hardcore action that always leaves Galactica fans begging for more!”

Dallas in Space, in other words. The SciFi Channel passed on the pitch: Though fans love Battlestar Galactica, it’s ratings have been sadly in decline, and its an expensive show to make. But the WGA strike changed all that — all of a sudden, SciFi was sitting on an already-written pilot they could move forward with. So they did!

No surprise, then, that now that the strike is over, Caprica’s been highlighted as a two-hour Battlestar backdoor pilot prequel from executive producers Ronald D. Moore and David Eick. It still sounds gruesomely dull to me, but I suppose we’ll see. Now isn’t that the sort of authoritative critical commentary you read SF Scanner for?