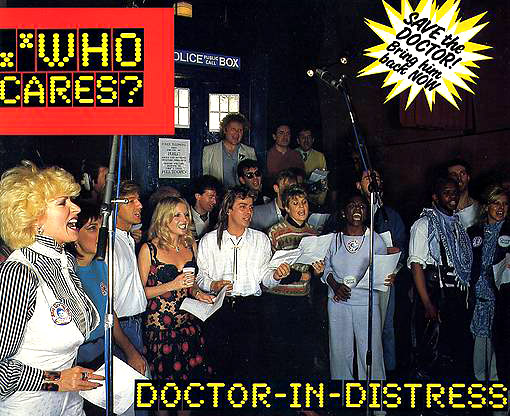 Yesterday, I spent a great deal of time shaking my fist and hitching up my trousers in the general direction of George Lucas as if he were a small child cavorting on my lawn and I were a crotchety, kid-hating octogenarian. Essentially, my beef is, “Why won’t George Lucas listen to me?” Lucas dismisses such complaints as the petulant whining of self-indulgent fans, and that annoys me even more.

But maybe the man has a point: fans involved in franchises do tend to ruin things. Over at io9, Charlie Anders has made note of her favorite moments of franchise-ruining by sci-fi fans, and her thesis is pretty convincing: die-hard fans should stay on the other side of the camera. Here’s one example:

The BBC’s Doctor Who was still a runaway success in the mid-1980s, partly thanks to the return of old monsters like the Cybermen and the Daleks after years in retirement. Producer John Nathan-Turner started going to conventions in the U.S. and England and … hired “superfan” Ian Levine as a “fan consultant.” All of a sudden, you had stories with plots like, “The scientist from 1974’s “Invasion of the Dinosaurs” tries to stop that sock monster we glimpsed briefly in 1964’s “Dalek Invasion of Earth” from eating the cricket player from 1982’s “Black Orchid,” and we won’t bother to explain what’s going on. It’ll be awesome!”

Compelling evidence, but it’s hard to imagine how Star Wars could suck worse if a fan was put in charge: hell, that’s why the Expanded Universe is the only aspect of Star Wars that still counts.

How To Tell When The Fans Are Killing Science Fiction [io9]