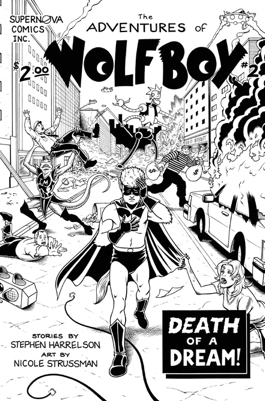 This morning, Variety has word that The Weinstein Co. has optioned “Evan Kuhlman’s Wolf Boy: A Novel, published in 2006 by Crown. Irwin Winkler and Jill Cutler will produce the feature through Winkler Films. Says Variety: “The
novel concerns the Wolf family, which loses a son in a car accident. The other son channels his grief into the creation of a comic book
superhero based on his brother called Wolf Boy.”

Actually, it’s a graphic novel that’s being written by the novel’s main character, Stephen, and a fairly frightening one at that — with not only monsters but superheroes that look like monstrosities as well. Said the author last August, “I’ve long
thought that Wolf Boy could be an
incredible movie, something along the lines of
Ordinary People meets American
Splendor.” If they do it right, they’ll have us tearing up while also enjoying some monsters.