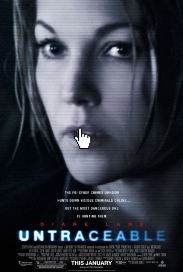 Remember Untraceable? The webcam-slinging serial killer flick starring Diane Lane is ancient history in the US, but its overseas release is just beginning — and the film is already in hot water thanks to the ethics of its marketing campaign. Facebook and Seesmic have yanked it because of content deemed “hateful, threatening, or obscene.”

Picture Production Company (PPC) created a Facebook profile called “Kill With Me” that echoed Untraceable‘s killer’s antics, releasing more and more of a torture scene from the film. The footage was accompanied by the following text: “This guy is going to die. You want to see his stinking flesh burn and bleed and blacken? Until he’s some twisted dead thing? … The more fans I get, the more I’ll show” PPC’s stunt on Seesmic was in even poorer taste: One of the site’s members, an actor, vanished for a short time before video surfaced on Seesmic showing him being bound, gagged, and murdered.

Untraceable took plenty of knocks from critics who felt the
film’s message was muddled or even deeply hypocritical — it seemed to
be looking down judgmentally on a culture eager to witness realistic
(or even real) violence, yet simultaneously provided just that with
numerous cold-blooded torture scenes. In taking their marketing to the
next level, all they’ve done is finally expose themselves to be sicker
than the average Internet user– fatally undermining any point their
movie tried to make.