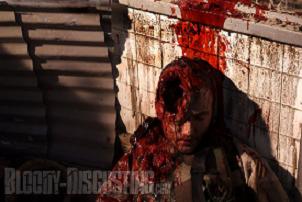 Bloody Disgusting just lived up to its name. In uploading one of the bloodiest movie stills released from The Stone House, the site has completely grossed me out (in a good way). The Stone House, a movie in which soldiers destroy a sacred, haunted artifact, is the second of three films director Alex Turner wants to make about horror and war.

While Bloody Disgusting says The Stone House is a sequel to his previous release Dead Birds, sceenwriter Simon Barrett, via his MySpace blog, says they’re absolutely incorrect. Explains Barrett, “The Stone House is NOT in any sense a sequel or prequel to Dead Birds. Alex and I are considering the film part of a thematic trilogy.”