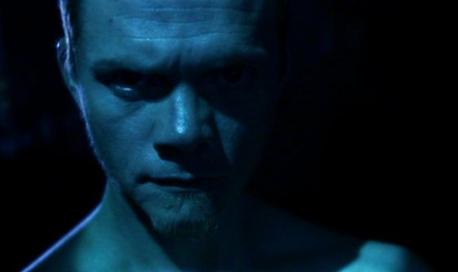 The Signal, which opens this weekend, is more than just a blood-soaked nightmare (though I can vouch that it is, indeed, that). It’s also what the directors have referred to as an “apocalyptic love story,” with stars Anessa Ramsey and Justin Welborn struggling to find each other amidst the chaos. Yesterday Justin phoned me from Atlanta to talk about his bumps and bruises, the trials of low-budget cinema, and being a celebrity ass.

Q: I couldn’t help but notice that you took quite a beating in the film. Was any of that for real?

A: Yeah, I got pretty beat up. But a lot
of the work I do anyway is extremely physical — I tend to approach
roles physically more than I do mentally. In the part of the movie when
you see me bust through the door, I broke the door off its hinges with
my back. By the end of
the shoot, I ended up with a bruised windpipe from being choked for
hours on end. I mean, on a budget like this, there are no stunt
doubles… you pretty much have to be
punk-rock about the whole thing.

Q: For many, your introduction as an actor is going to be the nude scene at the beginning of The Signal.

A: Hey, naked is the easiest place to pull
emotions from! There’s nowhere to hide, unlike with all the blood and
dirt. I’ve already taken crap from my friends about being a celebrity
ass — but isn’t male nudity making a comeback in movies? Did
you see Viggo Mortenson in Eastern Promises ? So I don’t mind going there.

Q: There are several sort of possible endings presented.
While you were filming, did know how it would end?

A: The ending itself was something we played with while we
were shooting, trying to find the right feel. We wanted to leave the characters
in a very uncertain place, and let the audience make their own decision about
the outcome.

Q: What is it about horror that lends itself toward smaller, independent pictures?

A: Horror
sells — there are a lot of devoted fans who want more and more. You
can make it for cheaper, you can make enough to make another movie —
hopefully whatever movie you want. And you can’t do that with a lot of
other kinds of movies, like war dramas. Though actually, [Signal director] Dan Bush made a great movie, A Day in the Life, which has a WWII storyline. With small resources and big smarts, you can go a long way.