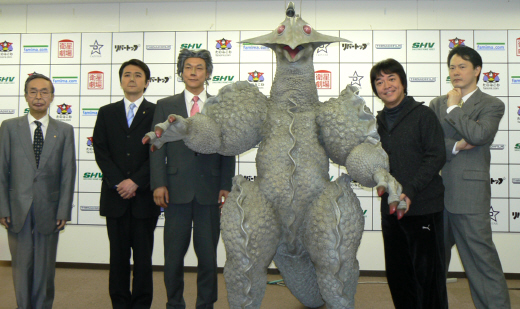 In these remake-crazy movie times, it needs to be stressed that as long as someone can come up with an inspired reason to remake an older film, then there’s no reason not to.

Case in point:  Japanese studio Shochiku hiring Minoru Kawasaki to make a new version of the 1967 kiaju flick The X from Outer Space.

Now, X was never considered one of the great Japanese monster
movies, but that doesn’t really matter to Kawasaki, whose wonderfully
demented films include The Calamari Wrestler, Everyone But Japan Sinks, and The Rug Cop
(about a cop granted special powers by his toupe). Obviously, this new
film will be more of a parody — and is a perfect match of director and
material.

According to Sci-Fi Japan, the new film will actually be called Guilala’s Counter Attack: The Touyaku Summit One-Shot Crisis, bringing the monster (named Guilala) to this year’s G8 summit in Touyaku, Japan. and giving Kawasaki the opportunity to lampoon world politics and Japanese culture in his typically offbeat and surreal style.  And better yet, Kawasaki will be forgoing CGI and will shoot the FX in the old fashioned “man in suit” style.

Guilala’s Counter Attack: The Touyaku Summit One-Shot Crisis opens in Japan in the fall, so expect bootlegs to hit the U.S. by spring of next year.