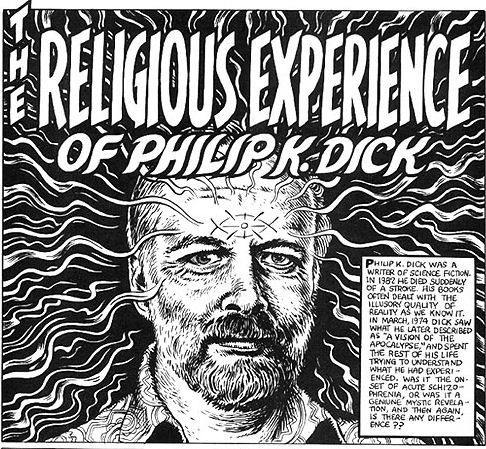 You may not believe this, but Philip K. Dick was out of his nut. More over? He did drugs. I know, it’s hard to believe: The man who wrote about hallucinators on Mars (We Can Dream It For You Wholesale), Substance K (A Scanner Darkly), murderous robots (Do Androids Dream of Electric Sheep), and a post-apocalyptic world where time goes backwards, requiring you to sit on the toilet when you eat (Counter-Clock World) was a viper. Strange, but true.

But did you know Philip K. Dick was religious?

Again, it’s true. On February 20, 1974, Dick was recovering from the effects of sodium pentothal administered for the extraction of an impacted wisdom tooth. Answering the door to receive delivery of extra analgesic, he noticed that the delivery woman was wearing a pendant with a symbol that he called the “vesicle pisces.” He then spent the next two months experiencing a series of visions which he described at first as “laser beams” from God, but which eventually became experiences interacting with Jesus in ancient Rome. These were the origins of his novel, Valis.

Yup, Philip K. Dick was a strange guy. Also a strange guy? Booty-obsessed underground cartoonist Robert Crumb, who illustrated Dick’s entire adventure for an issue of Weirdo in the mid-80s. Robert Crumb might be more “normal” than Dick, but he sure knows madness when he sees it, and his style perfectly captures the feverish epiphany of the hallucinogenic mind.