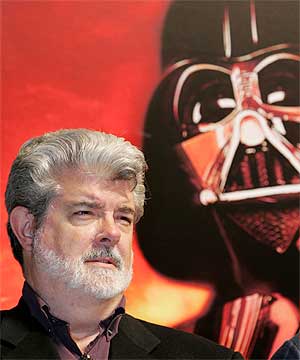 In the famous words of comedian Patton Oswald, “I was thinking the other day that if I had a time machine… would I go back and witness something, like find out who Jack the Ripper was, or witness the Kennedy Assassination? But the first thing I thought of doing if I actually had a time machine, what I’d do is go back to 1993 or 1994 and kill George Lucas with a shovel.”

This is not a marginalized point of view amongst sci-fi nerds. It’s undeniably hard to watch someone desecrate a cherished landmark of youth like Star Wars, but thumbs want to be plunged into squinty eye-sockets when the despoiler is none other than the creator himself. But how else to react to a man whose tinkering with the original films makes every single one of them worse.

Greedo shooting first, Jabba’s non-sensical appearance in A New Hope, the wimpy scream from Luke as he falls down the shaft in Empire Strikes Back… Most of us could
rant for hours over a few beers. And if George Lucas happened to walk
into the bar? Some of us would probably consider glassing him.

And now a new website is offering all Star Wars fans that same metaphorical opportunity. The People Versus George Lucas is soliciting for video rants from critical fans. These will be juxtaposed with celebrity interviews
and then released as a feature-length documentary. No, George Lucas
won’t care. But it’ll make you feel better, won’t it?