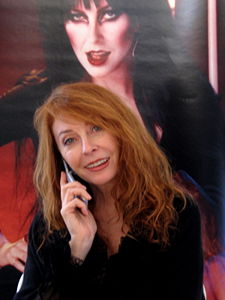 Did you ever wonder how Elvira, the Mistress of the Dark, got her start in horror? There a clip on YouTube that has Elvira herself telling you the tale. Elvira began as part of the Groundlings comedy troupe in Los Angeles. When local TV horror host Larry Vincent retired as the sinister Seymour, the Fright Night show’s director came to see Cassandra Peterson do a Valley Girl skit. He was blown away, and the rest is horror history. The former Vegas showgirl who even dated Elvis Presley left her dreams of being a serious actress behind, and never regretted her decision. Elvira marketed herself well by having companies produce everything from Elvira-branded Halloween makeup and a pin-up calendar to a motion simulation ride called “Superstition.”