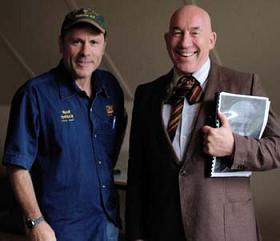 Is the lead singer from Iron Maiden the new Rob Zombie? Bruce Dickinson, the old school hard rock band’s lead singer, penned the screenplay for Chemical Wedding, an occult thriller which, according to Variety, “stars Simon Callow as the reincarnated Aleister Crowley, an occult scholar who was once labeled as the most evil man in Britain.” Crowley wasn’t just “an occult scholar.” His very existence struck fear into the hearts of the U.K. residents throughout his lifetime.

Says the Iron Maiden Web site, “Crowley was a major Edwardian figure and a scandalous character. A
Cambridge graduate, he became an infamous mystic and occult scholar and
although he died in 1947, his books are still in print and he remains a
major focus for the occult world. In the film, Crowley’s spirit is
re-animated by a superconductor mainframe, transforming the shy and
stuttering Professor Haddo (Callow) into the charismatic but sexually
depraved Crowley who wreaks havoc with the students and faculty of
today’s Cambridge campus.” If the movie’s a hit, Dickinson will be directing films a la Rob Zombie, no doubt.