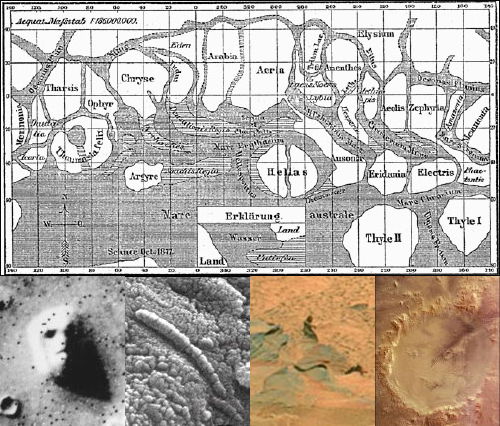 The phenomenon is known as pareidolia: the tendency to see humanoid shapes and faces in random patterns. It’s why Jesus appears in the scorch marks of your English muffin. It explains the Face on Mars (and the lesser known Smiley Face and Kermit the Frog of Mars), and it describes SciFi Department head Kevin Maher’s insistence that he sees Martian yetis tromping through the crimson wastes when he looks into the night sky. But fortunately for our fevered friend, he’s not alone–people have been seeing things through their telescopes on the surface of Mars for a very long time.

The BBC’s Dr. Chris Lintott has just written an article tracing the long history of Martian pareidolia. It starts with early astronomers who were positive that the surface of the red planet was covered in watery canals (in which, they posited, Martian amphibians might frolic like schoolchildren). The trend continued through the 1970s, when the Viking Spacecraft took the now-infamous photo of the Face on Mars. If you’re keeping score at home, it has since been proven to be just the effect of shadows.

Lintott’s fascinating article utterly debunks the so-called “proof” lunatics use to illustrate the greatness (or even existence) of dead or hiding Martian civilizations. Of course, if you’re a believer, you might not find it as enjoyable.

The Long Quest For Life On Mars [BBC]