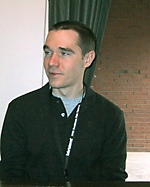 Director J.T. Petty is a clever guy. This week he managed to speak at length with Shock Till You Drop about his upcoming film, The Burrowers, without giving away any details about its monsters — except for what they aren’t. And yet the interview reveals him to be such a thoughtful and humble filmmaker that I actually believe him when he says they’re scary. Didn’t I say he was clever?

The Burrowers circumvents the pitfalls of a vapid and disposable teen cast by taking place in the Old West, already a playground for unrest and violence. Petty has made sure his creatures are as real as the landscape: “I’m a huge believer in latex and foam and practical monsters on set,” he says, confirming that CG effects were used only for clean-up purposes. He’d like to reassure audiences that the titular underground enemies don’t resemble those from the 1990s Tremors in the slightest: “It’s a completely different tone and a completely different world… with this I wanted to make something more in line with The Thing and Aliens.”

“Part of what I love about Aliens is that they have a good set of rules and how the monster works,” says Petty. “And the Alien is just going through its life cycle, it’s not malicious – which is so much scarier than something that is hunting you and awful. These are things just getting dinner and that’s so much scarier to me.” While it will be some time before we know exactly what Petty has in mind, the rest of the interview should leave you with no doubts that The Burrowers themselves are in capable hands.