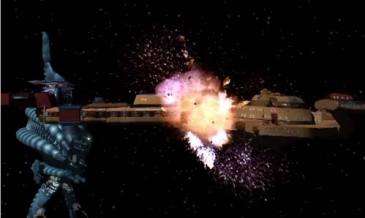 Johan Alm knows why he watches science fiction. It’s not for the allegories or the aliens, the technobabble or the treks. It’s the battles — the big space fights filled with thousands of effects, explosions and, okay, extraterrestrials.

SpaceBattles is devoted to user-generated and submitted 3D videos of epic interstellar dogfights. “Many sci-fi sites are so science related,” Alm says. “I’ve always found that enjoyable. But when I was watching shows like Star Trek and Babylon 5, I was really just always hoping for big battles. I never bothered much about phaser megawatts, I just wanted to make cool movies.”

At least, that was the site’s goals when it was first created. Since then, while it has succeeded in featuring dozens of amateur space videos, it has also grown to encompass sci-fi movie news, a movie directory, fan-submitted fiction, and even some real space news. Ultimately, Alm says that his goal remains to share his love of 3D movies while simultaneously inspiring others to participate in it. “3D gives you the freedom to create anything you want,” he says “and it’s a thrill to see weird wire frame boxes taking shape to become a proper CGI movie. My hope is that my site can inspire more people to start using 3D, and of course create more SpaceBattles for us all to enjoy!”