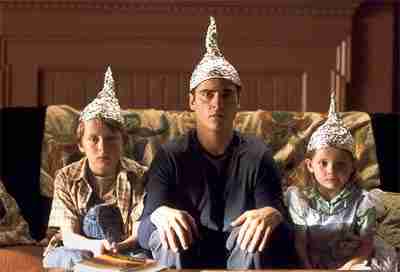 Every movie fan has had that moment of outraged incredulity which can only be captured with the Internet-age acronym: ‘WTF?!?!’ Some moment of Hollywood stupidity so ridiculous that the only proper response was to launch from one’s seat, eyes bulging and spraying froth, as little ectoplasmic exclamation points come bubbling out the top of your head. At such moments, obscenity comes naturally to the tongue in a sort of glossalia of swear words.

My favorite example of such a moment is in M. Night Shamlyan’s Signs,
when it turned out that water kills aliens, melting through their flesh
like acid. To reduce them to an intergalactic race with the same weakness as the
Wicked Witch of the West was a mind-bogglingly stupid “twist” from
a director who has become known for them. It doesn’t take a genius to
see that invading a planet made up of 70% water, or eating people who
are 80% water, is not exactly the sort of plan you perfect space travel for.

Over at SF Signal, they’ve asked a gaggle of sci-fi writers their favorite “WTF” moments. Signs is there, as is Star Trek V, 2010 and Evolution, as well as one Kevin Maher expounding upon the dumbness of Conquest of the Planet of the Apes.