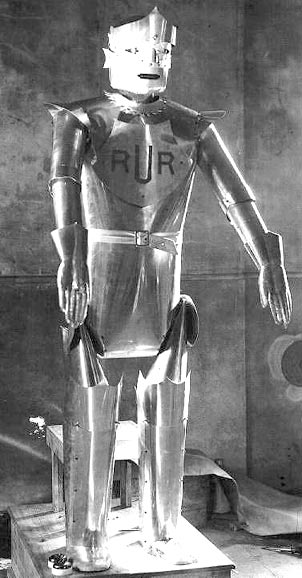 Seventy years ago, television was not the 500+ channel sensory overload it is today. The proper comparison might be to imagine a dusty Thomas Edison type screaming at Watson through an ancient camera that’s hooked up to cables and to a flickering two-inch cathode ray in the other room.

But on this day in 1938, the BBC made television history by airing the first sci-fi television show ever to an audience comprised of approximately four techno-fetishistic early adopters. An adaptation of Czechoslovakian author Karl Capek’s play R.U.R., it introduced television to the field of robotics just as the play had introduced theater-goers to what would prove to be the 20th century’s metallic, servo-controlled answer to the Golem.

Furthermore, it was Capek’s play that first solidified the sci-fi
trope of robots eventually turning against their human masters in an
inevitable robot uprising, a theme that has been capitalized on by
nearly every sci-fi movie since, from The Terminator to The Matrix. May we have 70 more years of televised robot revolutions to come.

On This Day: The First Science-Fiction Television Program [Comic Mix]