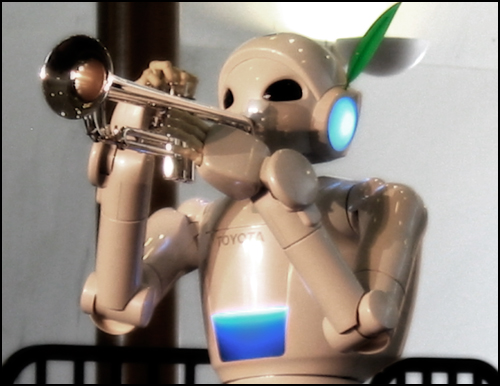 Everyone knew the day would come when the robot armies would converge on Washington, D.C. I assumed it would happen after the field of robotics had accidentally stumbled upon a firmware upgrade for sentience, at the trail end of an era of violence that would have washed the streets of this proud nation in blood. The Robot Revolution has to kick off sometime.

As it turns out, robots have converged on Washington far earlier than I anticipated. As part of the Kennedy Center’s “Robotopia Rising” exhibit, hundreds of adorable, non-murderous robots are on display doing the most innocuous of robotic activites, such as dancing, walking up stairs, playing the trumpet, and having monotone yet provocative cyberchat exchanges with Japanese salarymen.

The excellent And I Am Not Lying blog has a detailed write-up: “As astounded as I was during the Asimo demo, I couldn’t help but think “this is how it starts. Now they’re cute and helpful, and we all kinda want one. Later … who knows.” It was like being in the boardroom of OCP 2 minutes before the ED209 freaks out, or in the first 30 minutes of the first “V” movie. Right now, robots are fairly delicate and any robot uprising could be quelled with a Super-Soaker and a Louisville slugger.”

Welcome the Cute Plastic Overlords: ‘Robotopia Rising’ at the Kennedy Center [And I Am Not Lying]