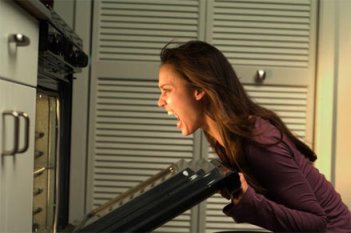 Remake-fatigue strikes again! No one expected Shakespeare, but it seems that not even the visual treat of Jessica Alba was enough to keep critics from taking their scalpels to The Eye:

“Packs all the ocular thrills of a three-hour wait at LensCrafters.” –Jim Ridley, LA Weekly

“Jessica Alba was a good choice for the lead — the role doesn’t demand much more of her than her creamy presence and boy-bait appeal.” –Kurt Loder, MTV

“The less said about the ending, the better. It’s stupid and insulting and makes a mockery of everything that comes before it. Other than that, it’s okay.” –James Berardinelli, Reelviews

“It’s hard to know who bears the brunt of the blame for The Eye‘s stunning dullness: Maybe star Jessica Alba, an actress of conspicuous limitations.” —Maitland McDonagh, TV Guide

“Louder and more literal than its inspiration, The Eye benefits from a spiky performance by Alessandro Nivola as Sydney’s rehabilitation counselor.” –Jeannette Catsoulis, The New York Times

“Completely wasted in the sister role, Parker Posey hovers in the background, looking pained and waiting in vain for something meaningful to do.” –Tasha Robinson, The AV Club

“(Alba) was never more convincing than she was as Paul Walker’s moral-minded girlfriend in the tropical thriller Into the Blue. She had little to say and little to wear, but she’d found her calling as a good-hearted mermaid. If she’s going to keep doing fright movies, maybe she can be the Esther Williams of horror.” –Wesley Morris, The Boston Globe