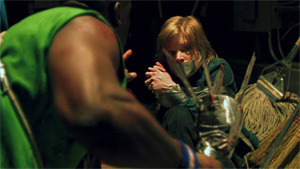 A no-budget indie horror flick that gets more good reviews than bad ones? Stop the presses! The Signal took its share of lumps as well, but it appears to have left a mark on viewers. Here’s hoping for a wider release and an appropriately rabid fanbase.

“A daisy-chain dystopia filmed by three different directors, “The Signal” combines the inconstancy of an omnibus film with the blandness of art by committee.” — Sam Adams, Chicago Tribune

“The Signal has the crazy all right, bless its cold and sick little heart.” — Jim Ridley, The Village Voice

“There is undoubtedly a cadre of adherents who will extol the movie’s virtues. Such is that case with any bold cinematic endeavor. The fact is, however, that boldness does not equate to effectiveness.” — James Berardinelly, ReelViews

“In a movie about perception, misperception and the ramifications of
misunderstanding, it’s a bit ironic that the directors can’t get out of
one another’s way.” — John Anderson, The Washington Post

“Nostalgia for 2003 is quietly afoot. The film recaptures an age when
AT&T was still Cingular and when almost every scene seems to be
unfolding in a video for a Hoobastank song.” — Wesley Morris, The Boston Globe

“You’ve got to like a bargain-basement horror movie that spends half its budget on duct tape and fake blood” — Peter Hartlaub, SFGate