The Academy Awards: Not usually a bastion of support for the horror movie industry. And this year, Oscar was punished for his insolence with the lowest ratings in the history of this boring show. Might that have something to do with a total lack of horror movies represented amongst the nominees? You do the math, champ, but on this end of the bridge, it all adds up to one equation: Academy Awards – Horror = Suckage.

So let’s rectify the situation. How about the forgotten categories of the Academy Awards? They are there; the Academy doesn’t like to talk about them, but you’d be surprised at what secrets $20 and a half-empty fifth of Mad Dog 20/20 can pull out of an unsuspecting custodian. Here are the hidden horror categories for 2007…

Analysis
• Venom was a great-looking monster trapped in a bad plot. You can’t hold that against him, ’cause he had the best saliva-splattering, pointy-toothed, angry roar thing going this side of Hillary Clinton.
• Now the Squid-Faced Dude from the third Pirates flick — sure, that’s not traditional “horror” — but man, was that creepy. Even the Girls Gone Wild chicks wouldn’t make out with that guy, and thus far science has yet to find something they won’t mack with for $50.
• Grendel just plain rocked, and if there were a category for Best Spawn of Angelina Jolie’s Fictitious Demon Womb, he would win that in a walk-off homer.
• I didn’t notice a good Lovecraftian flick in the mix in 2007, but I live in San Francisco and Random Tentacles shooting out of a dense fog freak me out. The Mist should be disqualified because I already have one set of tentacles in the nominees (see “Squid-Faced Dude,” above), but it’s Stephen King, so if you don’t like it, begin your most awesome online flaming … now.

And the winner is… Pus-Oozing, Sickle-Hand Dude from 300. Come on, they gave this guy only, like, 30 seconds of screen time? Are you kidding me? Gerard Butler may be all buff and whatnot, but you can see bods like that at any gym and/or parade on San Francisco’s Castro Street. Much respect for the serious investment in bench-press time, Gerard old bean, but until you’ve cut off your hands and replaced them with some mystery sickle thing that you used to off-with-the-heads of failed generals, get thee to the backlot to free up screen time for a real star. Can this brotha get a movie of his own? Maybe a few sequels? Maybe by the fifth installment of the franchise, he can take on Chucky, with Michael Myers as the special guest ref.

Analysis
Okay, so I don’t exactly read up on movies before I drop my $10. I go by titles.
• There Will Be Blood: Oil barons? Evangelicals? What the hell? I was expecting maybe a Rosemary’s Baby on pre-natal ‘roids, or a second movie with the above-mentioned Sickle Claw Dude.
• Sweeney Todd, The Demon Barber of Fleet Street: Look, it’s got the name Demon right in the freakin’ title. Imagine my shock when Johnny Depp, sporting his best Liberace coiffure, busts out into song. Song. Dude, the first rule of horror films is: You Do Not Bust Into Song. The second rule of horror films: You Do Not Bust Into Song.
• Balls of Fury: I didn’t know what this movie would be, but I was afraid to find out. Ping pong? Maybe a retrospective buddy-cop flick staring John Holmes and Bruce Lee, maybe a new Phantasm flick, but not ping pong.
• Bee Movie: Come on, like you weren’t expecting another The Swarm ? Maybe even a Deadly Invasion ? And while we’re on the subject, can we please get a cartoon movie that has some cartoon blood? Maybe a Bee-capitation? Somethin’, come on!  How about next year they kick out “Goofy Goes Rabid” or maybe “Attack of the Strawberry Shortcakes.” Also, someone please tell me why every cartoon character seems to be friggin’ bullet proof. Sorry, A.D.D. kicking in …

And the winner is… Sicko. That could have been the best title for a horror movie ever. Like, ever. Granted, the corpulent shambling mound of Michael Moore lecturing us on health care is ironic, sure, but frightening? No. The movie doesn’t scare you at all unless you actually live in Cuba, are not a ranking member of the party, and have to go to what passes as a “hospital” for the remaining 90 percent of the oppressed population. Oh wait, that’s rage, not fear … sorry, Mike, my bad.

No point even discussing this category. You either pay to see the same Zombie/Vampire/Werewolf monsters over and over again, or you don’t.

And the winner is … 30 Days of Night. Come on, it’s night for, like, 30 days there! You have to do something other than stall for four to five hours to outsmart these bad boys. So really, it’s a combination of a horror movie and a third-grade story problem. Come on, Jimmy, you can figure it out, use your head, Jimmy, think! 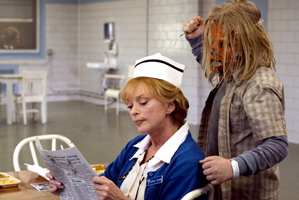 Analysis
I like sequels as much as the next cat. I won’t lie, if Critters IV comes on, I’m grabbing a cerveza and tossing the remote. That’s just good stuff. We won’t talk much about this category, either… I mean, what is there to say? Alien vs. Predator? I’m not tuning in to get a heartfelt character drama examining the human condition, if you know what I mean.

And the winner is … Body Parts & Boobies. Okay, okay, sure the Hostel movies have plots that are almost identical to the drama available at your local butcher shop (i.e., Step One: Get meat; Step Two: Cut meat; Step Three: Repeat as necessary — although cows don’t get to turn the tables on Sam the Butcher and stick a chainsaw in his chops). But hey, this is a pity vote: all the other world-famous monsters have had their day in the sun. What pseudo-award has Michael Myers not won, for crying out loud?

Thanks for reading. Now, if you’ll excuse me, there’s just a little bit of that Mad Dog 20/20 left, and I want to drown out my sorrow over the Sicko not being used to it’s full potential.

Scott Sigler writes tales of hard-science horror, then gives them away as free audiobooks at www.scottsigler.com. His first major hardcover, Infected, hits stores on April 1, 2008. If you don’t agree with what Scott says in this blog, please email him scott@scottsigler.com. Please include all relevant personal information, such as your address and what times you are not home, in case Scott wishes to send someone to “discuss” your opinions.