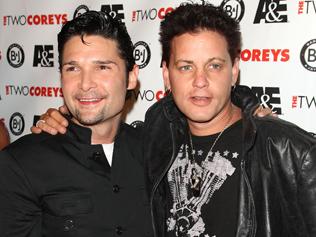 Though it’s a straight-to-DVD movie, Lost Boys II: The Tribe has all the casting drama of a theatrical release thanks to the involvement of Hollywood’s own “lost boys,” Corey Haim and Corey Feldman. Last summer it was announced that the Coreys would both return to their roles as the adult survivors of vampire-related trauma, but within days Haim elected to withdraw from the project, claiming it “…would disappoint (his fans) more with him in it than without him.”

Apparently Haim has deemed the world ready. Shock Till You Drop reported yesterday that additional shooting is now taking place on the set of The Tribe to include all the scenes that were cut from the script when he left the picture. While we have some months until we can see for ourselves what new heights (or depths) the Coreys have reached with their return to the genre, it’s strangely reassuring to know the Lost Boys will return with its original symmetry intact.