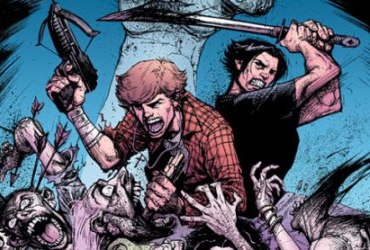 Coreys Feldman and Haim may only turn up in Lost Boys II: The Tribe for a couple of scenes, but someone finally found a way to catch us up on what their characters have been doing since the original 1987 vampire brouhaha — and it mercifully circumvents the necessity of having the Coreys act it all out for us. On May 14th, the comic series Lost Boys: Reign of Frogs will arrive, filling in the gap between the two films. Shock Till You Drop has the whole cover, as well as a note from Wildstorm about the series.

So is this comic all about the Frog brothers, then? I’m a little concerned about whether Haim’s character, Sam Emerson, gets to come out and play — and whether we’re due for another tearful scene between the Coreys over it. Fans are sure to be mollified either way; Reign of Frogs has more old-school awesomeness on the cover alone than anything we were expecting from The Tribe.