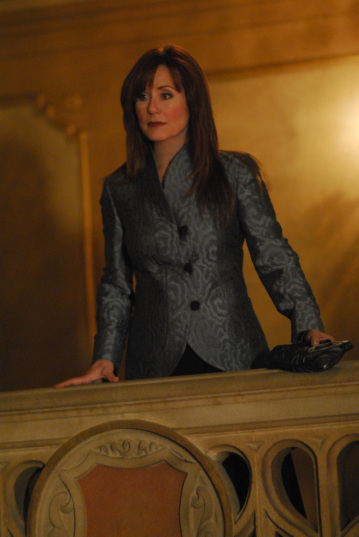 One of the wonderful things about the new Battlestar Galactica is that whereas the original show was just a cheap Star Wars rip-off with bizarre Latter Day Saint ideology thrown in, the re-launched series spends its action off-hours debating morality and politics in the post-9/11 world. It uses the psychological tendency to de-humanize the enemy and twists it on its head by offering us enemies that honestly aren’t human. The Cylons are humanized through conflict, further blurring the line of morality — it’s part of the reason why it’s such a powerful show.

It’s also what makes for some excellent discussion, even in unlikely circles. Case in point: The bloggers over at the usually dry and stiff legal blog, Concurring Opinions, have just posted two parts of a 40-minute interview with Battlestar Galactica creators Ronald D. Moore and David Eicks.

Part I focuses on the issues of legal systems and morality.
It examines the lawyers and trials in the show. It also examines how
torture is depicted, as well as how the humans must balance civil
liberties and security.

Part II examines politics and commerce. It explores how the Cylon
attack affected the humans’ political system, and it examines how
commerce works in the fleet.

Part III examines issues related to Cylons, such as the humans’
treatment of Cylons, how robots should be treated by the law, how the
Cylons govern themselves politically. Additionally, Part III will
explore the religious issues involved in the show.

I can’t imagine a group of lawyers talking the finer points of cosmic law with George Lucas about Star Wars or Gene Roddenberry about Star Trek without the conversation being ridiculous, but Concurring Opinion’s interviews are gripping. Check them out.