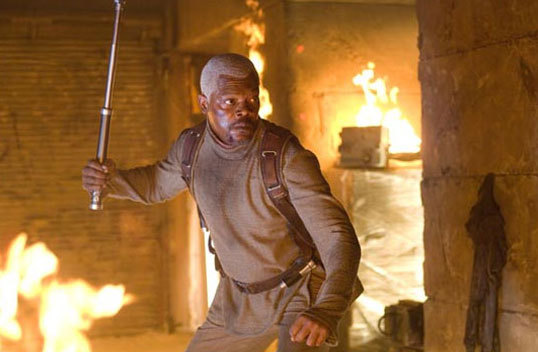 Jumper, Doug Liman’s much anticipated teleporters-vs.-religious-fanatics superhero blockbuster, hits theaters today. After all the hype, you’re probably asking yourself whether or not you should waste the time and money to go see it. For that answer, we turn to Rotten Tomatoes‘ constabulary of critics, after the jump…

“I doubt even the Sci-Fi Channel would touch this thing to fill a lazy Tuesday afternoon slot.” — Gina Carbone, Seacoast Newspapers

“Jumper is as annoying as any film in recent memory. And it violates the chief rule of a science fiction thriller by being amazingly boring, as well.” — David Kaplan

“Rachel Bilson’s Millie offers a pretty face and ugly dialogue, and Griffin exhibits even fewer likable qualities than David, but is much less interesting. Sam Jackson plays himself again, complete with requisite scars and terrible costume.” — Slice of SciFi

“Hayden Christensen has all but killed his career with his performance in Jumper.” — Rebecca Murray, About.com

“A herky-jerky mess of a movie, Jumper leaps about so erratically you get the feeling bent pogo sticks were employed in the editing room.” — Tom Long, Detroit News

“You might be disappointed by lead Hayden Christensen’s squint-acting methods, or by the fact that Jumper‘s plot moves exactly like its hero does: quickly, in random directions, for little discernible reason.” — Annalee Newitz, io9

“Logic takes the greatest leap in Jumper, a Sci-Fi thriller that plays like a frog jacked on steroids. ” — Peter Howell, Toronto Star

“Jumper is a special effect in search of a movie.” — David Frese, Kansas City Star