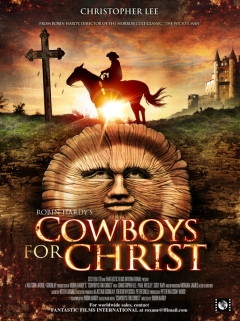 On paper, Robin Hardy’s Cowboys For Christ sounds like a perfect blend of terror and camp kookiness– and that’s even before you add Dynasty darling Joan Collins to the equation. This follow-up to his 1973 cult classic The Wicker Man (not the junk Neil LaBute served up in 2006) will see Collins taking over for Vanessa Redgrave in the role of Lady Delia Morrison. This news was reported
in the The Sunday Herald, along with the surprise that Hardy will be making a third installment in the Wicker Man dynasty, which he says will be “a comedy.”

Cowboys will mark Collins’ return to the Horror genre (it has been 30 years since Empire of the Ants ) and will reunite her with her Dark Places co-star Christopher Lee, who is up to his old tricks again as the leader of a secretive pagan community. The story, involving Christians from Texas who show up in Scotland to evangelize to the heathen May-Polers, is already loaded with potential — but the irony of the “cowboys” being greeted by by oil-rich Alexis Carrington Colby is too delightful for words.