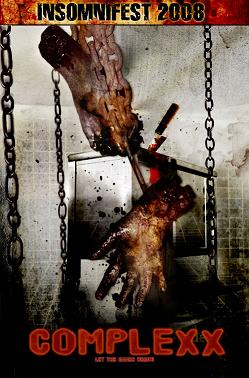 It’s a big gamble, but it’s also a compelling idea. Starting on February 11, the organizers of Insomnifest will place a dozen horror films online to view for the price of $4.99 each. While some films aren’t new, many have never seen life beyond the borders of the countries in which they were originally screened. Each day, two films will available for viewing, many with wonderfully cheesy titles like Backwoods Bloodbath (U.S.), Dead Floor (Indonesia) and The Grief (Sweden). The most unique plot seems to be that of Complexx, a Netherlands film about the late night slasher horrors that befall gamers playing Dark Planet 2 at a video game convention.

Will the experiment work? The organizers caution against sending films for next year’s fest: “We don’t know whether or not we’re going to do a festival next year. It all depends on how big a success it is this year.”