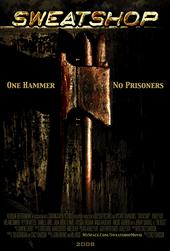 If you check out the MySpace page for the upcoming slasher film Sweatshop, you’ll be privy to various eerie things. Besides the giant-sized poster for the film about a rave that turns radically, murderously wrong, there’s also the trailer. It’s a pretty sexy edit that includes a glimpse of the killer/monster, the Beast, at 1:04 minutes in. (It moves by fast, so prepare to pause.)

The welder-helmeted cretin would scare anyone, and that’s exactly what screenwriter Ted Geoghegan wants. With director Stacy Davidson, their goal was to push it as far as they could. “Stacy and I agreed that our “Beast” needed to be something you wouldn’t want an action figure of,” he explains on his page. “Like a true nightmare, we needed something without motive, without emotion, and completely without reason.” That’s so evocatively written, it makes me want to see the whole film right now!