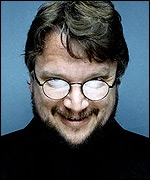 There are few men in Hollywood as busy these days as Guillermo del Toro. Between bringing the Cthulhoid terrors of H.P. Lovecraft’s At The Mountains of Madness to the screen and taking over the reigns from Peter Jackson in filming The Hobbit, he’s got big plans (and the trousers to match them). And that’s not even mentioning Frankenstein, Hellboy 2, and 3993.

But none of that is stopping del Toro from running off at the mouth about other dream projects, such as a film adaptation of Marvel Comics’ dimension-traveling, demon battling sorcerer Doctor Strange. If that weren’t enough, the horror and Sci-Fi also guru says he wants to get Neil Gaiman on board.

I talked with Neil Gaiman [about writing it]. I said, that’s an interesting character because you can definitely make him more in the pulpy occult detective/magician mold and formula than was done in the Weird Tales, for example…the idea of a character that really dabbles in the occult in a way that’s not X-Filey, where the supernatural is taken for granted.

Neil Gaiman really turned the popular view of Dr. Strange around with his Elizabethan take on the Marvel heroes in 1602. Teamed up with del Toro, this sounds like it could be as surprisingly good as Iron Man is shaping up to be.