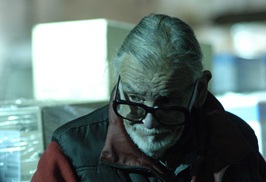 Zombie auteur George Romero talked with Monsterfest’s Matthew Kiernan about his new film, his constant anger, and how the undead are always misinterpreted by the critics.

Q: You once said that Night of the Living Dead was born out of the the spirit of the ’60s.  Do you look upon Diary of the Dead in the same way, if more negative?

A: Not so negative, no.  All the zombie films I’ve done… everyone keeps trying to define them.  In the old days it was like, “They’re the silent majority”.  No!  “They’re the hurricane.” It could have been any disaster, and the stories are really about how people respond or fail to respond to this sea change.  The world has changed. You have to change.  People won’t. Most of the stories I’ve done have been about people being unwilling to change. And it’s a revolutionary change, an inevitable change because the rules have changed.  In this film there’s a line, “God has changed all the rules,” and it’s about people failing to recognize that and failing to go along with it.

Q: Do you think your films are getting angrier?

A: I think I’ve sorta stayed there, in a way.  I think I’ve always been there, ever since the ’60s didn’t work.  Any of the stuff that’s been mine from the top, that bit of anger has always been there. But I always try to lighten the load with some slapstick and somehow it works.  Even that slapstick thing with the farmer in Diary, it’s actually a pretty angry moment.  That guy is pissed off. He’s had enough.  I think that’s what it is: being mad as hell — nothing changes and, in fact, it just seems to get worse.  It just blows me away that people don’t think.  It’s like, come on, man.  People are willing to sucker in to whoever throws up a blog.  Tribalism and all these blogs, all it does is create many more tribes.  I say jokingly, if Jim Jones was around and had a blog, there’d be millions more drinking the Kool Aid!  It’s sort of preaching to the converted.  That’s really what I’m attacking with this film: the fact that this guy, this character, thinks that all of a sudden that he can become some kind of savior or some sort of important figure.  A bit dangerous, you know.

Q: There has been a glut of zombie movies this decade.  Does that make it easier or more difficult for you?

A: We certainly haven’t felt the effect of the glut, if there is a glut.  I go to these conventions. At each one, a dozen young people come up to me and say, “I made a movie, will you look at it?” And it’s always a zombie movie!  I say, “Try something else or get an idea.  If you want to do a zombie movie, put some backbone in it.”  I think that’s what people fail to recognize.  It hasn’t been more difficult for us, I guess because of my reputation, I can always get the meeting, maybe not necessarily get the film.  And who knows?  If World War Z gets made, if Cell gets made, maybe it’ll hit that saturation point.  I honestly think it’s not so much the movies that have made this creature popular; I mean, I didn’t even think of them as zombies in the first one.  I didn’t call them zombies. They were “flesh eaters.”  What it is, it’s almost a new creature, and it’s the neighbors. The dead are coming back.

Q: The uncut Diary is going out with an R rating.  Are you becoming less enchanted with gore or does this just come out of the material?

A: The tendency when you’re shooting an objective piece is to do product shots on the gore, to focus on that.  We realized early on that violates this.  These kids aren’t going to go rushing in for a close-up.  And I found as we were watching dailies that it’s almost more effective to sort of stand back, the way they would be doing it, and see it happen in a wider shot.  We’re not making a sonata out of it.  They happen in real time and a bit at a distance.

Q: I saw your list of your top ten favorite films at Sight & Sound and you list one horror film, Roman Polanski’s Repulsion.  Why is that your favorite horror film?

A: It was the most recent film to work on me at an age when I should have known better.  And I thought that the craft there, that mirror shot and the bureau being pushed open, it was just so creepy…  It’s not a monster movie; it’s all psychological.

Special thanks to Lauren Felsenstein of The Weinstein Company.