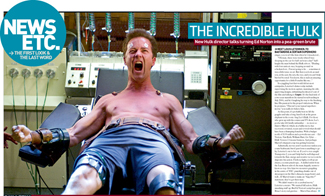 Empire Online has scored the first image of Edward Norton about to transform into a gamma-irradiated juggernaut of crippling physical violence from the upcoming Incredible Hulk.

Oh, sure, Norton’s not quite hulking out yet, but he’s already a big step up from Eric Bana, who was always too impossibly good-looking to be a plausible Bruce Banner. Norton’s got that pipsqueak egghead look to him. The kind of guy who just gets angrier and angrier until his eyes are jutting apoplectically out of his face, or   throws his toys across the room and holds his breath until he passes out. That’s the look you want in the Hulk’s alter-ego.

There’s also a picture of William Hurt as General Thaddeus “Thunderbolt” Ross. I’m amazed at how pitch-perfect he looks: I didn’t think it would be possible to one-up Sam Elliott, who seemed to be born to play the role, or at least the moustache, but good god… Hurt’s done it.