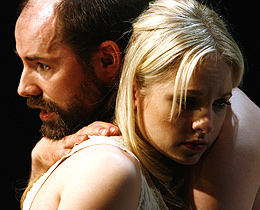 Before the Russell T. Davies revamp of Doctor Who, the Doctor was an asexual hero, too busy fighting Daleks to strip out of his cricket outfit. Sure, there was the First Doctor’s “grandaughter,” Susan, to indicate that the Doctor wasn’t some foppish dandy: He had sex at least once.

Davies hasn’t entirely changed that, but he’s made the Doctor’s sexuality pretty ambiguous. The Ninth and Tenth Doctors both come across as closet pervs who “travel alone” only until a cute and emotionally vulnerable 19-year-old skirt with a Daddy complex comes along.

Now the rumor is that the fourth season will introduce yet another companion with a daddy complex to the mix: The Doctor’s own daughter. This wouldn’t be the mother of Susan, but 23-year-old Georgia Moffett, who is Fifth Doctor Peter Davison’s own daughter. She’s a popsicle baby, made in a test-tube from some of the Fifth Doctor’s DNA.

It’ll be interesting to see if this is true. The casting decision of Davison’s own daughter is brilliant, and it would put the Fifth Doctor’s cameo in the Christmas Special into an entirely new light. That said, next season is already lousy with companions: a fourth can only confuse things.

But you know what would be truly genius? It’s no secret there will be a year’s hiatus at the end of the fourth season. The Doctor should go on sabbatical on Earth during that year, lending the TARDIS to his daughter for that year. Spin her adventures off into a new show. When the TARDIS is returned early next season, an entirely different Daughter Who drops it off.