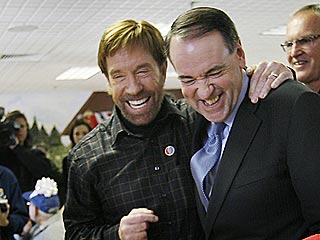 The most gripping drama out this year is not a future Oscar contender. It’s the race for president — and it’s studded with real stars.

What does all this glittering movie talent have to contribute to the political realm? Money, for one. “If they are at the fund-raiser, they draw a lot of people, and last election, 2004, $28 million, was raised in Hollywood — about 70% of it going to Democrats,” says Shootout co-host Peter Guber.

Shootout co-host Peter Bart argues that polls that say voters aren’t swayed by celebrity endorsements — a Pew poll, for example, said 70% of voters were not influenced by Oprah’s backing of Obama — may not be accurate. Guber concedes that Oprah may be the exception: “She is a force of nature.”

As someone who is politically active herself, Shootout guest, Patricia Clarkson (Married Life), agrees that stars don’t have tremendous direct influence. “I’m sure there’s someone out there that cares about…which candidate a celebrity’s endorsing, but for the most part [it doesn’t matter].” Still, she believes actors are citizens and they should be able to voice political opinions: “Shout them from the rooftops.”

If actors are intruding into politics, it’s only fair turnabout as presidents have long been in the acting business. “To be president,” says Bart, “you have to be a terrific actor. You have to be a performer. It is showbiz…”