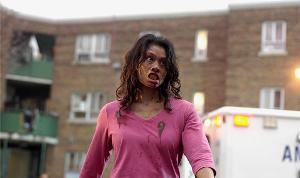 This weekend nostalgia met the future, as zombies walked the earth yet again in Romero’s latest brain-eater, Diary of the Dead. Reaction from witnesses has been thoroughly mixed: a new classic in its own right, or merely an aging auteur’s struggle to stay relevant? The fact that anyone’s thinking this hard about a zombie movie is a good sign.

“When there is no more room in hell, the dead will create a MySpace page.” –Nathan Lee, The Village Voice

“Sequences abound in which laughs freeze the blood… Romero is asking us: Do we stop at the scene of an accident to help or to look?” –Peter Travers, Rolling Stone

“In most horror movies, it’s a given that we should root for the heroes to make it out alive, but Diary of the Dead isn’t nearly so certain, and so it terrifies us all the more.” –Scott Foundas, LA Weekly

“Moderately scary, moderately amusing, intermittently dull and obvious, Diary of the Dead is not groundbreaking, nor even ground-quaking.” –Steven Rea, Philly.com

“Diary of the Dead is at its best when Romero is just goofing off, like when he shows us home video footage of a children’s birthday party in which no one realizes there’s something not quite right about the clown entertaining the kids — until his nose falls off and he decides it’s time for a snack.” –Rene Rodriguez, Miami Herald

“Diary acknowledges its own B-ness — it’s schlock Brecht, with thin characters and italicized dialogue – but Romero has still delivered a merry, blood-soaked kick in the Facebook.” –Ty Burr, The Boston Globe