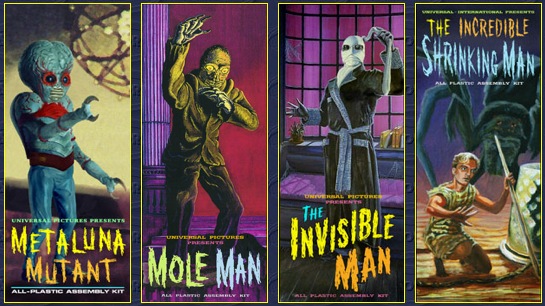 • A strange cross-promotion for a dying show: Big Brother “celebrities” will face-off in a Jericho themed contest by sorting through thousands of pounds of peanuts.

• io9 postulates that the “Earth Without Us” craze in sci-fi movies is due to environmental guilt. Either that or apocalypses are cool, in abstract. Take your pick.

• Some Star Wars steampunk sketchcards for your Victorian retro-enthusiasm.

• The trailer for the latest sequel to Starship Troopers will be online later today at the official site. Casper van Dien has not aged well.

• It looks like those ridiculous werewolf pictures leaked from the X-Files 2 set were gags on the press. Okay, I admit, I was burned… nicely played, Mr. Carter.

• Terminator 4 gets a release date.

• An amazing flashback to the monster model kits sold in the backpages of Famous Monsters of Filmland: the model boxes that could have been.

• Is David Tennant the worst Doctor Who ever?