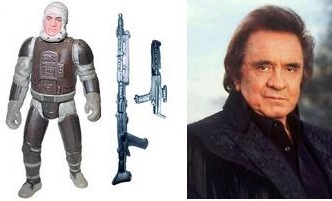 Star Wars action figures never looked much like the actual actors. Luke was barrel chested, with a face made of half-melted, amorphous putty. Princess Leia’s action figure was, unlike Carrie Fisher herself, lusty. The only figures that looked like their on-screen counterparts were the aliens and the robots.

So if the Kenner line of Star Wars action figures didn’t look like the actors who portrayed them, what celebrities did they resemble? Humor site Topless Robot examined each figure in minute detail, and came up with a hilarious list of superficial resemblances, including Princess Leia as Laura Bush, Luke Skywalker as the freakish Brian Thompson, and Johnny Cash as Dengar.

The 10 Star Wars Toys That Look Like Celebrities [Topless Robot]