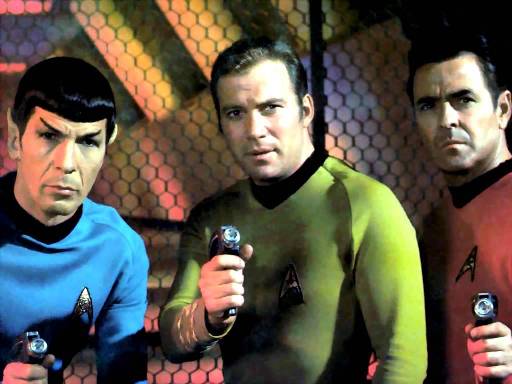 It seems odd. A mere week after the next-gen DVD format wars ended in Blu-Ray ripping HD-DVD’s spine out in a Mortal Kombat style fatality, we’re not seeing endless announcements of upcoming releases going the Blu-Ray route. We’re not even seeing an announcement from Paramount that their upcoming Season 2 Star Trek HD-DVD set is shifting to Blu-Ray. What we are seeing is a lot of announcements about television networks offering free digital downloads to consumers.

Will Blu-Ray be the next Laserdisc as digital downloads makes physical
media obsolete? No matter how far I extend my pineal gland, I don’t
have the answers. But the surge of (ad-supported) shows streaming
online is a good thing, and Paramount has just made an exciting
announcement: they will now offer all episodes of the original Star Trek online for free.

These don’t appear to be the remastered episodes with new CGI
effects, which is fine with me: If a ridiculous ’60s sci-fi aesthetic
isn’t going to pull me out of Star Trek, the antiquated
special effects aren’t going to either. In addition, CBS has put up
some other shows, the most notable of which for genre fans will be Rod
Serling’s The Twilight Zone.

This is a good idea, and a deft move for Paramount: offering all the original Star Trek episodes online for free will whet appetites for next year’s Star Trek cinematic reboot.