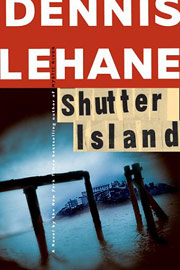 Everyone knows that superstar actor Leonardo DiCaprio plus superstar director Martin Scorsese equals potential big bucks. Today, The Hollywood Reporter says that foreign distributors are ponying up some of the biggest overseas dollars ever seen for the upcoming Shutter Island. Based on the Dennis Lehane (Mystic River) novel, the story centers upon “two U.S. marshals who are sent to a federal institution for the
criminally insane located in Boston’s Outer Harbor to capture a
violent female escapee.” DiCaprio, Mark Ruffalo and Michelle
Williams have all signed on to star.

But Lehane’s book isn’t just a mystery. It’s also rife with elements of fear and horror, especially the psychopathic portions of the book. At times, you’re not sure what’s real and what isn’t. Michelle Williams is going to rock that role.